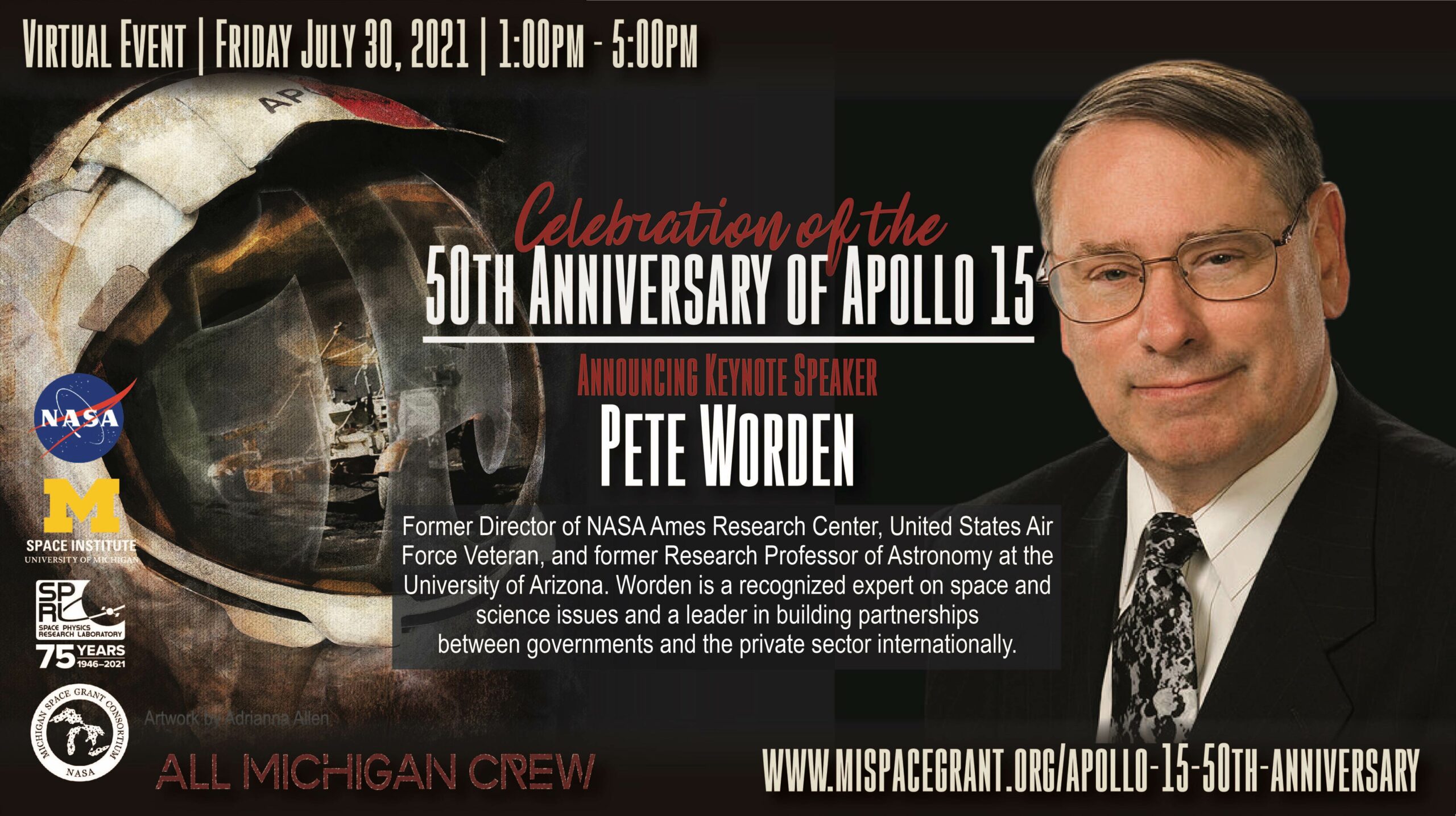 Michigan Space Grant Consortium (MSGC), Michigan Space Institute and Space Physics Research Laboratory (SPRL) are organizing a 50th Anniversary celebration of the Apollo 15th moon landing on July 30, 2021. Apollo 15 was an “All Michigan Crew” as all three astronauts attended the University of Michigan.

We have invited Pete Worden to join us as a keynote speaker and to help highlight the diversity and future of space exploration as we celebrate the past. The hope is to have presentations from NASA student groups such as BLISS. 2021 is also the 75th Anniversary of SPRL (Space Physics Research Lab) that launched captured V2 rockets with UM payloads into space in 1946.

Watch the recording from our event here on our YouTube Channel here: Prior to becoming Director of NASA Ames, Worden was a Research Professor of Astronomy, Optical Sciences and Planetary Sciences at the University of Arizona where his primary research direction was the development of large space optics for national security and scientific purposes and near-earth asteroids. Additionally he worked on topics related to space exploration and solar-type activity in nearby stars.

In addition to his position with the University of Arizona, Worden served as a consultant to the Defense Advanced Research Projects Agency (DARPA) on space-related issues. During the 2004 Congressional Session he worked as a Congressional Fellow with the Office of Senator Sam Brownback (R-KS), where he served as Senator Brownback’s chief advisor on NASA and space issues.

Worden retired from the United States Air Force in 2004 after 29 years of active service. His final position there was Director of Development and Transformation, Space and Missile Systems Center, Air Force Space Command, Los Angeles Air Force Base, CA. In this position he was responsible for developing new directions for Air Force Space Command programs and was instrumental in initiating a major Responsive Space Program designed to produce space systems and launchers capable of tailored military effects on timescales of hours.

Worden was commissioned in 1971 after receiving a Bachelor of Science degree from the University of Michigan. He entered the Air Force in 1975 after graduating from the University of Arizona with a doctorate in astronomy. Throughout the 1980s and early 1990s, Worden served in every phase of development, international negotiations and implementation of the Strategic Defense Initiative. He twice served in the Executive Office of the President. As the staff officer for initiatives in the George Bush administration’s National Space Council, Worden spearheaded efforts to revitalize U.S. civil space exploration and earth monitoring programs.

Worden commanded the 50th Space Wing that is responsible for more than 60 Department of Defense satellites and more than 6,000 people at 23 worldwide locations. He then served as Deputy Director for Requirements at Headquarters Air Force Space Command, as well as the Deputy Director for Command and Control with the Office of the Deputy Chief of Staff for Air and Space Operations at Air Force headquarters. Prior to assuming his current position, Worden was responsible for policy and direction of five mission areas: force enhancement, space support, space control, force application and computer network defense.

Dr. Mark W. Hilburger is a Senior Research Engineer in the Space Technology Exploration Directorate at NASA Langley Research Center in Hampton VA and was appointed Space Technology Mission Directorate (STMD) Principal Technologist (PT) for Structures, Materials, and Nanotechnology at NASA HQ in 2019. His roles and responsibilities include developing technology investment plans across his assigned discipline areas in coordination with NASA Exploration Programs and Mission Directorates. Identify technology needs that will enable science and exploration missions. Lead focused technology studies and coordinate with Agency Capability Managers in technology development activities to maintain and advance capabilities. Previous to his STMD PT appointment, he was the Principal Investigator and Manager of the NASA Engineering and Safety Center’s Shell Buckling Knockdown Factor Project from 2007 to 2018. The goal of the project was to develop and validate new design, analysis, and testing methods for buckling-critical launch vehicle structures.  His responsibilities included defining and managing the integration of analysis, design, manufacturing and test teams to develop an efficient, multi-disciplinary approach to optimal structural design, verification, and validation.  His staff included experts across three NASA centers, industry, and academia.  He also coordinated Space Act Agreements with Boeing, Northrop-Grumman, the German Research Laboratory (DLR) and the European Space Agency (ESA). Dr. Hilburger has over 20 years of experience in the field of structural mechanics and materials and specializes in High-Fidelity Analysis and Design Technology Development and Experimental Methods for Aerospace Structures.  He has been presented with numerous awards and including the 2018 Middle Career Stellar Award presented by The Rotary National Award for Space Achievement; the NASA Exceptional Engineering Achievement Medal, 2010; the NASA Engineering and Safety Center Engineering Excellence Award, 2009; selected as of the nation’s top 100 young engineers and scientist by the National Academy of Engineering, 2009; and the NASA Silver Snoopy Award, (Astronauts’ Personal Achievement Award), 2006. He received his Ph.D. and M.S.E. in Aerospace Engineering from the University of Michigan in Ann Arbor, MI in 1998 and 1995, respectively, and his B.S. in Mechanical Engineering from Rutgers University in New Brunswick, NJ in 1993.

The Space Physics Research Laboratory (SPRL) designs, constructs, tests, operates and analyzes data from space flight instruments. Now operating as an independent entity under the College of Engineering, SPRL has built more than 30 space instruments, instrumented numerous sounding rockets, balloons and aircraft, and developed ground-based instruments. This is also the 75th Anniversary of SPRL that launched captured V2 rockets with UM payloads into space in 1946.

BLiSS is a student-run research team to design, build and test deep-space habitat prototype technology. The team is comprised of both undergraduate and graduate students from multiple disciplines at the university.

Assistant Professor at the University of Michigan

Dr. Benjamin Jorns is an assistant professor in the Department of Aerospace Engineering at the University of Michigan where  he is co-director of the Plasmadynamics and Electric Propulsion laboratory. This is one of the largest and oldest academic groups devoted to the development of next-generation propulsion systems.   Dr. Jorns received his B.S. in Physics from Yale and his M.A. and Ph.D. degrees in Aerospace Engineering from Princeton. Prior to joining PEPL, he was a member of the electric propulsion group at the NASA Jet Propulsion Laboratory (JPL) in Pasadena, California where his work combined experimental and analytical techniques to investigate propulsion systems for the next generation of NASA robotic missions. 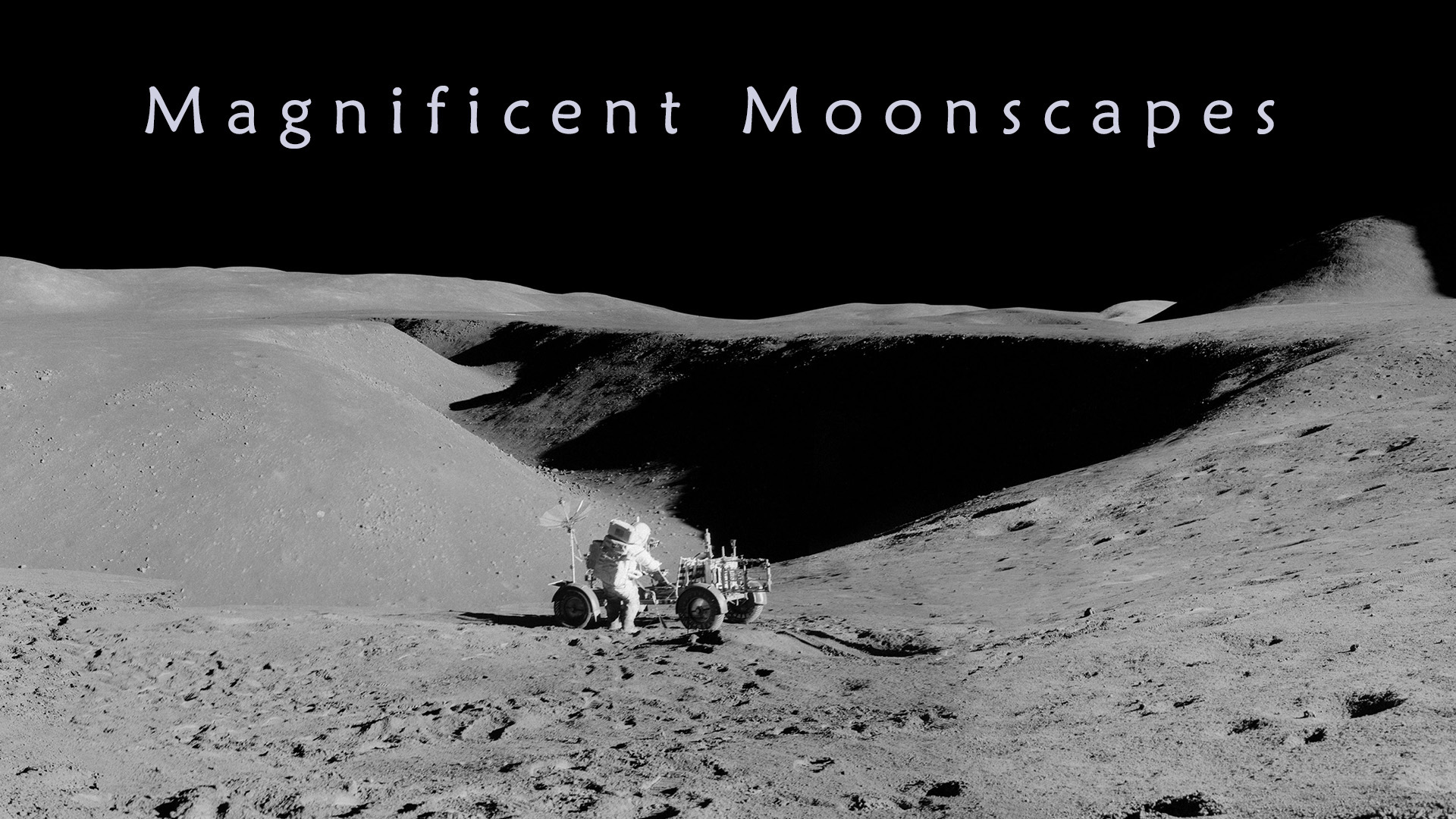 Join us for a voyage through the mountains, canyons and discoveries of the Apollo 15 landing site which included the first Lunar Rover to drive across  the terrain. Mike Murray, Astronomer and Planetarium Manager, will include personal stories from his experiences watching the launch and tracking the mission as it happened. Mike will also include some of the personal anecdotes from the Apollo 15 astronauts, including Al Worden, the Command Module Pilot who made the first deep space walk 200,000 miles from Earth. 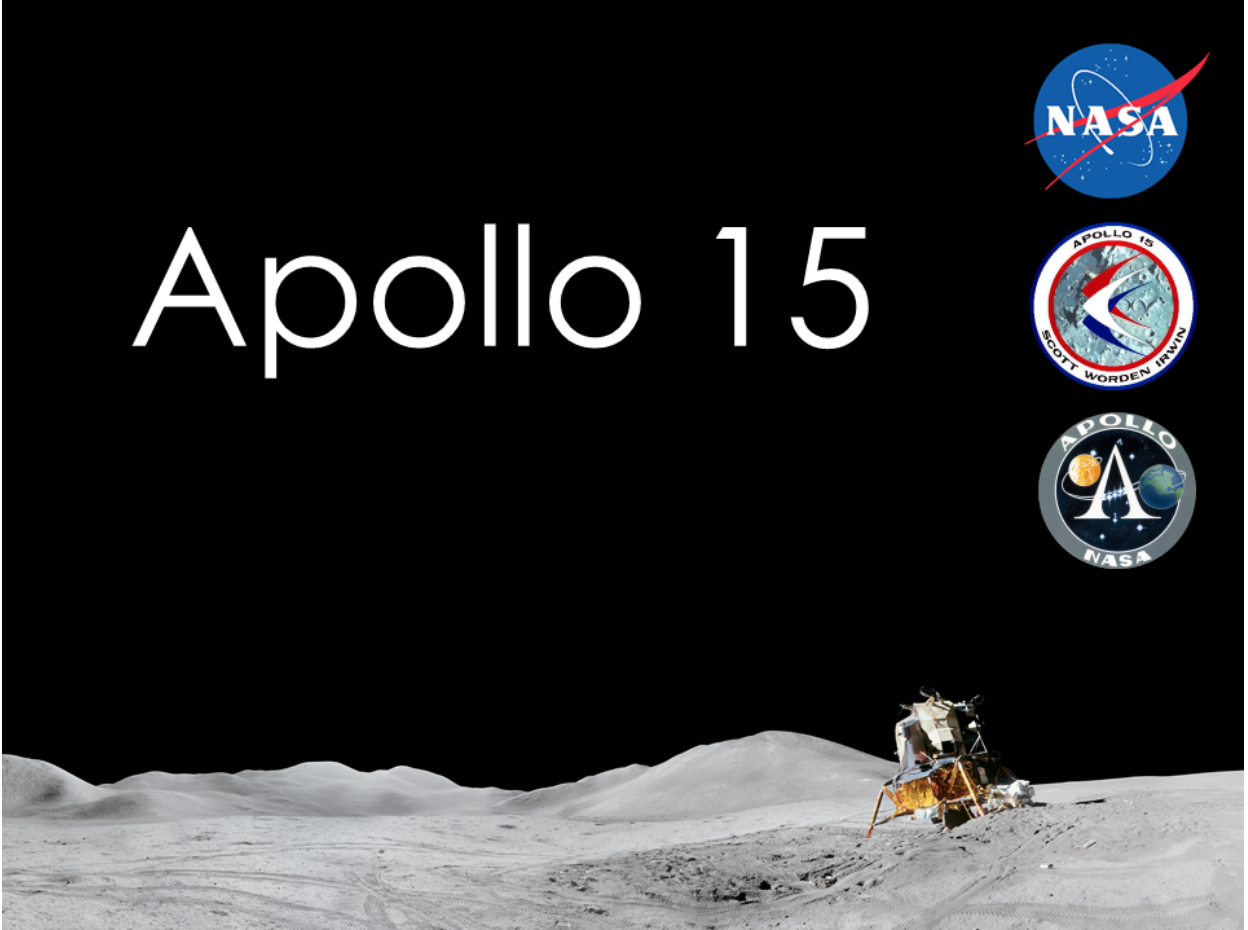 July 26 marks the 50th anniversary of the launch of the Apollo 15 mission to the Moon. Celebrate this historic mission with a public presentation that provides an overview of the mission including highlights, video clips and images. The presentation is meant for use by anyone interested in learning more about Apollo 15 or for those who may be presenting on the topic. You can download and adapt the slides to your audience.

MSGC launched an art call for submissions for artwork to use for the promotional material of the event. The contest was open to any Michigander of any age and closed on January 5th, 2021. There were three pieces chosen. Learn more about the winners here.

The Michigan Space Grant Consortium is primarily funded through a NASA Training Grant.